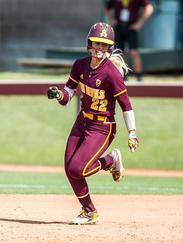 Ranked sixth in Softball America’s Top 100 and made First Team All American
Launched six home runs in the abbreviated season, finishing second on the team
Her 11 doubles led the team and checked in as the second-most in the Pac-12
Led the Sun Devils with 39 hits and 66 total bases to rank at the top of the Pac-12 and in the top ten nationally
Posted 32 runs to lead the Sun Devils and rank third nationally
Finished the season with a .433 batting average (team leader) and .795 slugging percentage (third on team)
Notched 27 RBIs, 10 extra bases, and 11 walks
One of five players to have started all 29 games for the Sun Devils

Emerged as one of the nation's premier hitters in her junior campaign
Ranked second on the team with 16 home runs
Her .412 batting average led the prolific Sun Devil offense through the 2019 season
Kindra's 70 hits through the season also led the ASU offense in 2019, as did her .500 on-base percentage and her .841 slugging percentage
Her 1.20 runs per game ranked third in D-1 Softball, and led all players in the Pac-12 in 2019
Her 18 doubles led the team, and checked in as the third most among Pac-12 hitters
Named to the All-Pac-12 First team, as well as the NFCA All-Region Second Team, before being named a Third Team All-America by the organization

Selected to the all Pac-12 Second Team and NFCA All-West First Team honors in her first season with the Sun Devils.
Hackbarth was instrumental in the team’s offensive success, completing her sophomore campaign leading the team in batting average (.368), hits (74) and triples (5). Played a key part in a win against BYU (3/31) as she tied her previous career high of four RBIs, coming way by her first career grand slam.
The sophomore compiled 74 hits in her 170 at bats, marking the most hits in a season since Amber Freeman recorded 79 in 2015.
Recorded a multi-hit game in six straight outings spanning from 4/22-5/4 while batting an incredible .522 average in that time.
During postseason action, Hackbath accrued an efficient 9-for-22 from the plate, four RBI and one home run.
One of three Sun Devils to have started all 61 games in the 2018 season.
Her five triples marked the fourth most all-time in ASU history in a season and the first time a batter recorded five or more triples since 1995 (Jayme Jenkins).

Played in 44 games with seven starts, playing mostly in right field.
Started six games in right field and one as the designated player.
Hit .237 on the season with a .256 on-base percentage and .342 slugging percentage, mostly from the second spot in the lineup or as a pinch-hitter.
Went 9-for-38, including a triple and two doubles, with four RBIs, 13 runs scored and a walk.
Recorded 23 putouts and an assist without a fielding error.

Personal
Parents are Paul and Mary Hackbarth ... has a brother, Adrian, and twin sister, Maddi, who also plays for the Sun Devils ... enjoys dancing, snowboarding, longboarding and ice skating ... favorite athlete is Jackie Robinson because he never gave up ... biggest athletic thrill was batting 6-for-7 in a 10-inning win ... most admires her mom because she inspires her and is a very strong and intelligent person.